Knowing a little bit about Earth’s relationship with the Sun allows us to understand how the intensity of the Sun’s rays can change during the year, and the importance of protecting our skin.

What causes the change in seasons?

Earth revolves around the Sun, taking a year to complete one orbit. But as it does so, it also spins on its own axis (an imaginary line that extends from the north to the south pole), making one complete turn in 24 hours – this explains our alternating pattern of day and night.

However, Earth is tilted by 23.5o in relation to its plane of orbit, and it’s this tilt that causes the change in seasons, affecting the duration of daylight and the angle of the Sun’s rays at different locations.

This means that at different times of year, different places on Earth receive more or less sunlight. The tilt also affects the distance through Earth’s atmosphere that the Sun’s rays travel. Earth’s atmosphere is approximately 100km thick. Rays entering the atmosphere directly overhead (90° angle) travel a distance of roughly 100km, but if the Sun is lower in the sky, the path length through the atmosphere is longer, resulting in more absorption, reflection and scattering, which reduces the intensity of the Sun’s energy at the Earth’s surface.

The closer a place is located to the poles, the greater its seasonal variation.

What are solstices and equinoxes?

As Earth orbits the Sun, solstices and equinoxes mark key transition points between the seasons.

In the northern hemisphere, Earth is tilted towards the Sun during summer and away from it during winter. The summer solstice occurs around the 20th/21st June and the winter solstice around 21st/22nd December, when the North pole is tilted closest to, and farthest away from, the Sun.

The June solstice marks the beginning of summer when the Sun’s rays are directly overhead at the Tropic of Cancer (the imaginary line around the Earth that indicates the northernmost position that the sun’s rays can ever be directly overhead, as the Earth revolves around the Sun). The Sun reaches it’s highest point in the sky at noon and it is the longest day of the year in terms of daylight hours.

As Earth travels around the Sun, it reaches a position on it’s orbital path known as an equinox, when the Earth’s poles are neither tilted towards nor away from the Sun. The equinox marks the occasions when the Sun passes directly over the equator (the imaginary line drawn around the Earth, halfway between the North and South poles, dividing it into northern and southern hemispheres), and the duration of daylight is virtually the same everywhere on the Earth’s surface. The name equinox comes from the Latin: aequus, equal; nox, night.

Defining the dates of the seasons – when does spring actually begin?

Spring has sprung and summer is on it’s way. However, there are separate dates that could be said to mark the beginning of spring in calendars, so when does it actually begin?

Two methods frequently used to define the dates of the seasons are the astronomical and meteorological calendars.

Astronomical seasons are based on the position of the Earth’s orbit in relation to the Sun, marked by equinoxes and solstices. However, seasons vary in length; the dates of the equinoxes and solstices can change due to Earth’s elliptical orbit of the Sun. In the northern hemisphere, the spring equinox, also known as the vernal equinox, can occur on the 19th, 20th, or 21st March (this year it is 20th March). In the southern hemisphere, the seasons are reversed, but begin on the same dates.

For statistical reasons, it’s common practice for weather scientists (meteorologists) in many middle and northern latitude countries to divide the year up into four 3-month blocks. These meteorological seasons are more closely aligned with the temperatures experienced during each time period. Because the date of the equinoxes change, it would be difficult to compare the seasons from year to year, as it wouldn’t be comparing ‘like with like’. So, from a meteorology perspective, to facilitate forecasting and comparison of monthly and seasonal statistics, spring always begins on March 1st.

What is solar radiation?

Solar radiation is electromagnetic energy radiated from the Sun, including light and heat, which allows life to flourish on Earth. The Sun is also a source of ultraviolet radiation (UV); the two types of UV that we need to be concerned about are UVA and UVB.

Why is UV important?

UV in sunlight (solar UV) has both positive and negative effects. Although UVB plays a role in vitamin D production, UV can also damage skin cells, with overexposure causing both visible (sunburn) and invisible damage, resulting in premature ageing, eye damage (including cataracts) and increasing skin cancer risk. However, the good news is that most skin cancers can be prevented by adopting sun protective behaviours.

Longer wavelength UVA is mostly involved in skin ageing while shorter wavelength UVB is mainly responsible for sunburn. However, both types of UV are linked to the development of skin cancer.

Solar UV is mostly comprised of UVA (typically > 95%), but the ratio of UVA to UVB is influenced by the height of the Sun in the sky, which is determined by latitude (distance north or south of the equator), season and time of day. The higher the Sun, the greater the content of UVB.

UV cannot be seen or felt, so you need to defend yourself against overexposure. Both occasional and chronic UV exposure can be damaging; sunburn is the most harmful, but frequent non-burning exposures can also increase skin cancer risk.

The UV index measures the UV level at the surface of the Earth, and gives an indication of the potential for skin damage. It is calculated in a way that indicates the risk of developing sunburn, which is mainly caused by UVB. The UV index ranges from zero upwards – the higher the number, the greater the risk. Remember the amount of time spent outside and personal vulnerability e.g. fair skin type are also important.

UV levels are influenced by many factors, including: your location (latitude and altitude), time of day, time of year, cloud cover and reflection.

In Ireland, make sun protection part of your daily routine, particularly from April – September when the intensity of sunburn producing UV is greatest. Stay safe by limiting time in the midday sun when UV is strongest, typically between the hours of 11:00am – 3:00pm.

The UV index forecast for Ireland is included in Met Éireann’s regional weather forecasts from May to September but please be aware, that this can only be an average for any one day over the whole country. The clear/sunny sky peak UV index is reduced by cloud cover.

Changing the way the world sees dermatology through the GRIDD project

A Century of Service 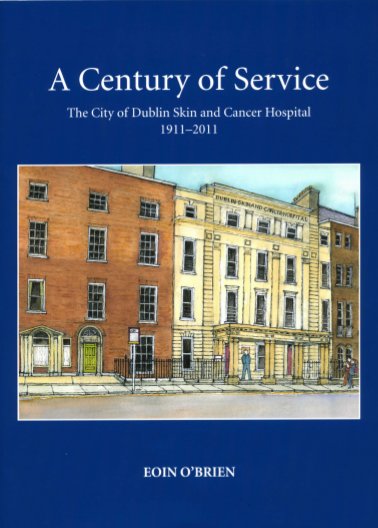 Recognising that the initiatives on which it had embarked could not have been achieved were it not for the endeavor of many people who had served the City of Dublin Skin and Cancer Hospital during its near century of existence, the Charity funded publication of a history of the Hospital to mark its centenary year. A Century of Service: The City of Dublin Skin and Cancer Hospital 1911 – 2011 by Eoin O’Brien is available from the Irish Virtual Research Library and Archive at the James Joyce Library in University College Dublin and for download in PDF format below.

This work is distributed under a Creative Commons non-commercial license. Copyright and all other rights are retained by its author. For more information please visit the Creative Commons website.
DOWNLOAD PDF